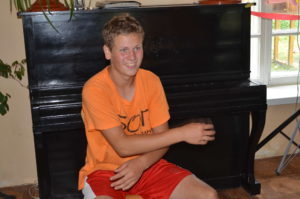 Our School Without Walls (SWW) students in Moldova met Yura three years ago when he was 12 years old. They met Yura through his sister Inna who had been attending church for a while and had made a decision to follow Christ. She then started inviting Yura to children’s events at church. Yura was always very shy and reserved and wouldn’t talk to anyone. Inna explained to them that he had speech impediments, and she gave some more background information about their family. Their mother worked in Russia to support the family and was almost never around. Their father was an alcoholic and was abusive towards his children.  Yura’s speech was developing normally until one day when his father returned home drunk and his aggressive behavior scared Yura so badly that afterwards he shut down as a way of protecting himself, and his speech problems were one way that this change manifested itself.

“For the past three years, we could see that Yura loved coming to church,” shares one of our SWW students. “He loved spending time with the other children, and later teens. He came to every activity offered for his age group, including summer Bible camps and Sunday morning services. This year we decided to invite Yura to help out with some of the practical aspects of running our summer Bible camps. When we asked him he was beyond surprised and overjoyed and gratefully accepted our invitation. Over the course of the summer, every team member noticed changes taking place in Yura, who began opening up, joking, and even praying! He faithfully and responsibly carried out all of the tasks assigned to him, and he served as an encouragement to many other team members. Many also commented that they had noticed a significant improvement in his speech, saying that for the first time they could fully understand what he was saying! I’m grateful to God that I know Yura and that we could serve God together this summer. God has placed enormous potential in him, as in all of us, however Satan has been working hard to destroy it since his childhood. I pray and believe that Yura will glorify God with his life!”