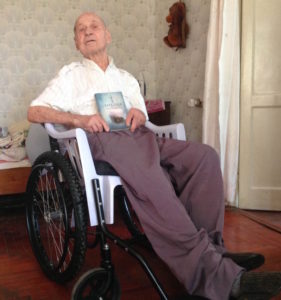 Alexey is 90 years old and lives in Kiev, Ukraine. After serving as a lieutenant in WWII, he worked several other jobs. When he finally retired, he was in very poor health. Alexey’s health has continued to decline in recent years, and his limited use of his legs makes it impossible for him to leave the house on his own. 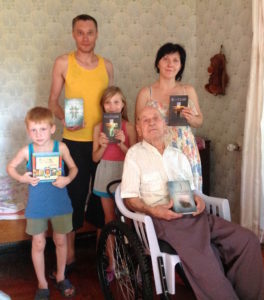 Now, Alexander, Larissa, Angelina, and Maxim have a new home–and Alexey has found a loving family to take care of him. For several years, Alexey had felt so alone in his apartment, but now he has found new joy, hope, and strength.

School Without Walls (SWW) students in Zaporozhye recently visited Alexey and his new family, bringing food packs, Scripture pieces, and a brand new wheelchair for Alexey. With Alexander and Larissa’s help and his new wheelchair, Alexey is finally able to go outside and enjoy the fresh air again! Alexey and Alexander’s family are so thankful for the goods our SWW students brought, and they were even more encouraged by the SWW students’ prayers, which reminded them they are not alone or forgotten–they are loved by God and loved by their Christian family.

Help us continue to meet the urgent physical and spiritual needs of those suffering from the conflict in Ukraine:

Posted in I Care, Ukraine
DONATE